Home Blog Are attitudes toward women progressing or regressing?

“The women who follows the crowed will usually go no further that the crowd. The woman who walks alone is likely to find herself in places no one has ever been before.”

I’m not going to lie: The results of the presidential election are making me a little nervous. Like many people around the world, I watched as the numbers rolled in. I went to bed before they declared a winner, but two of my colleagues stayed up until 3AM, watching on tenterhooks. As my friend tweeted, “I can’t believe what I’m seeing. This can’t be happening.”

I think a lot of the things Donald Trump says are for shock value – kind of like how Gordon Ramsay goes off the deep edge and yells obscenities at cowering, would-be chefs for ratings. But it’s hard to ignore some of the lewd and inappropriate comments he has made over the years (and continues to), and I have hard time figuring out how to rationalize to young girls and boys that this behavior is not OK, even if the president does it. This isn’t a political blog, however, and that’s as far as I’ll go on the topic.

When I looked at data from men who took our Gender Roles Test, I saw some old-school attitudes that I am hoping will change (surprisingly, in younger men, not older), and some positive trends. Here’s how attitudes towards women pan out in men from different cohorts (results are in percentages; they reflect the proportion of men who agree with the statement): 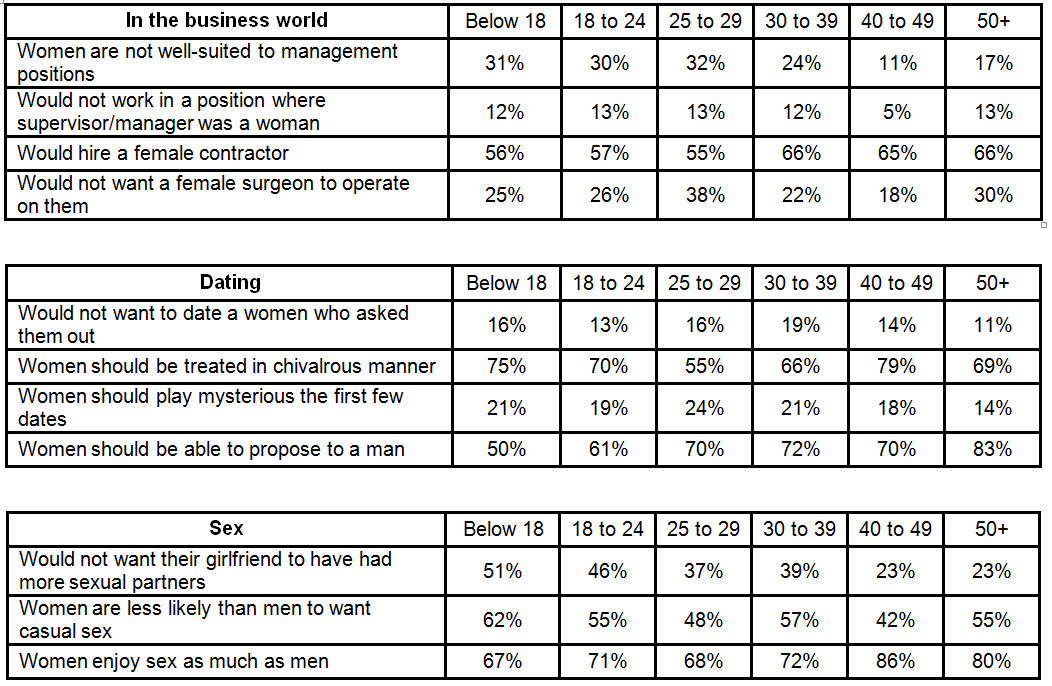 Evidently, the attitude a man adopts towards women depends a great deal on how he was raised. My uncle grew up with two sisters – and he’s much more in touch with his emotions and his feminine side than they are. In contrast, my highly traditional and conservative (former) colleague grew up in a home where he was made to believe that a woman’s role is in the home, and where his father expected to be waited upon – which is why he was stunned and annoyed when I refused to wash his dishes after he ate his lunch.

“In my home, it is the woman who does the cleaning and washes the dishes!” he exclaimed.

“We’re not in your home, we’re at work. And I’m not your wife or your mom. Wash your own dishes.” I responded.

But here’s what I’m seeing that gives me hope:

This one’s for my uncle: