Home Blog Scientific theory and research: Nothing more than entertaining the impossible 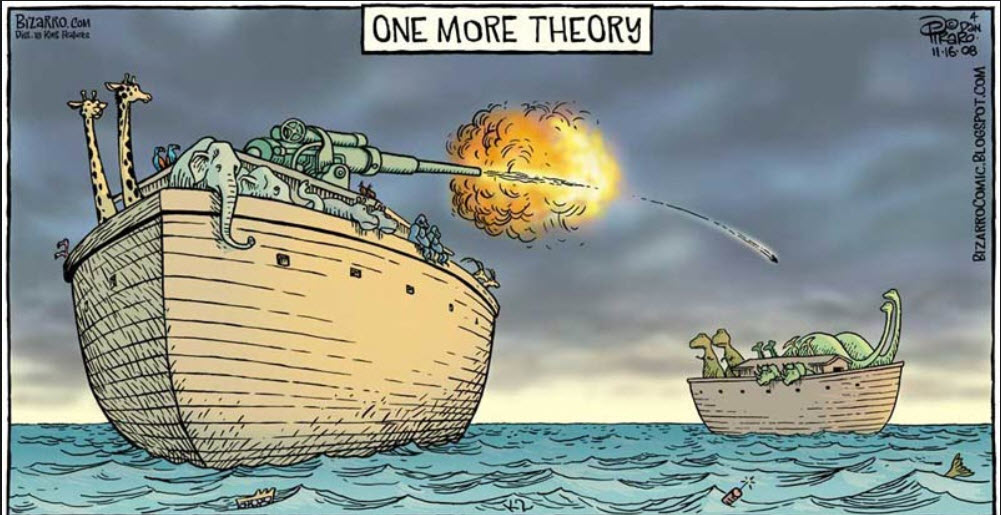 I consider myself a fairly open-minded person. The idea that ghosts might exist, for example, is entirely probable in my opinion, and I have to admit that the researcher in me is piqued by paranormal investigators who rely on more scientifically based equipment. Granted, I wouldn’t bet my savings on the reliability of an “EMF detector” (Electromagnetic Frequency indicator – when it spikes it is supposed to indicate the presence of a spirit), but it’s better than assuming every knock and every “orb” is a paranormal phenomenon (rather than, say, old, creaking wood and dust balls). But save your Big Foot theories, please. A creature estimated to be at least seven feet tall and furry can’t possibly be that good at hide and seek. What I’ve never been able to understand is why Big Foot investigators don’t just set up hundreds of cameras in some remote part of a forest where people are unlikely to venture. If I were big and hairy, I wouldn’t want to be too close to civilization either.

I admit that the paranormal and ghosts in particular are a step off the scientific radar, but if scientists have already begun to reconsider the concept of consciousness, which was once the territory of “lesser” paradigms, like philosophy and, to a finer degree, metaphysics, is the belief that energy can be expressed and even manipulated by non-physical beings that much of a leap? Personally, I don’t see death so much as reappearing in a new, “heavenly” world as much as a shift in my consciousness or awareness.

As a researcher, I have to dare myself to ask impossible questions; to entertain possibilities that might initially be scoffed at. Like the belief that emotional intelligence, touted as a better predictor of success than general intelligence, has a dark side. Yet research we conducted at Queendom revealed that social insight, an EQ competency that reflects a keen understanding of human nature, can be used for evil. If not complemented by empathy and a strong sense of social responsibility, social insight can lead to dishonest, deceptive, and manipulative behavior.

Some “rebel” scientists have dared to ask – and answer – the questions that few of their peers want to think about. Although the results of their experiments have had their fair share of criticism, their discoveries, or at least the possibilities they entertain, are fascinating. For example, Dr. Masru Emoto took samples of water and subjected some to positive thoughts and others to negative thoughts. When the samples were frozen, Emoto discovered that the water samples exposed to positive thoughts developed perfectly symmetrical ice crystals, whereas those exposed to negative intentions were more fragmented. A few decades ago, the CIA delved into parapsychology and conducted several successful experiments on “remote viewing,” in which test subjects were able to access information about objects or contents of envelopes thousands of kilometers away. Even the existence of the placebo effect (in which a sugar pill or mock procedure performs just as well and sometimes better than the experimental medicine or surgery), cannot be denied, compelling researchers to create placebo groups in order to account for its effects.

Belief in myths and the paranormal has always been attributed to the uneducated or to the “hysterical” (I have a university degree and as I far as I can tell, I am pretty grounded psychologically…so I’m an outlier). Data from our Paranormal Beliefs Test, however, bears this theory out: As education increases, belief in the paranormal, folklore, witchcraft, and psychics sharply decrease. The question is, why? If anything, I believe that higher education should open up our minds to a wealth of possibilities. Not that long ago, scientists believed that gorillas and giant squid were mythical creatures, and they continue to discover new species (run a search in Google for the Araguaian Boto, a “new” species of dolphin or, if you like having nightmares, check out the “Ninja Lanternshark”).

While my field of study (and the nature of my personality) compel me to find proof of the theories that I propose in my research, there is one principle that I cannot deny: It’s only by entertaining the improbable, the weird and the wacky that I am able to do what I do. It’s only through contemplation of the impossible that I can determine what is possible.

Hi Queen D, I like where you are headed with this - too often even discussing issues like positive thoughts or positive energy has people rolling their eyes and thinking I'm a flake or naive or worse. Then they challenge me to a specific point and expect me to have a detailed list of supporting documents!! It's about stepping aside from people like this - people who don't value your strengths and instead see them as weakness. There are others out there who do value the energy and positive vibe - and they won't exhaust your good nature. Find them and keep them close! Thanks, Bren

Thanks Bren! Sometimes, we have to challenge the status quo, and be open to new, even off-the-wall ways of thinking.

".....If anything, I believe that higher education should open up our minds to a wealth of possibilities...." - having some university degree doesn't make one open-minded; think what counts here is learning and experience, and lots of self-knowledge;

Agreed - but I felt, at least in my case, that being exposed to new ideas and theories, new ways of looking at things (human behavior, for example), encouraged me to take the blinders off. I finally understood that the way I saw the world was but one of many angles and perspectives. Thanks for stopping by!