Home Blog Success hang-ups – What’s holding you back from awesomeness? 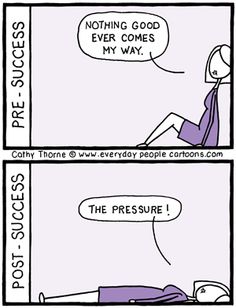 It’s inevitable. I’ll be watching the finals in an Olympic event, and there will always be that one athlete who, on the brink of getting a medal, will suddenly stumble (literally and figuratively).  In their tearful post-interview, they’ll say something along the lines of “I don’t know what happened. I guess it just wasn’t mean to be.”
Or a player in a professional team sport will get a lucrative contract extension after an amazing season. Not long after, the player suddenly experiences an unproductive streak and gets absolutely no goals/touchdowns/etc. The harder he tries, the worse his performance seems to get. “He doesn’t deserve his new 10 trillion dollar contract!” a washed-up-athlete-turned-host will predictably complain on a sports newscast. “Now that he’s got his money, he doesn’t care!” I, in turn, will yell back, “You don’t get it! It’s self-sabotage! It’s a psychological thing!” And naturally, whoever happens to be in the room with me will gently say, “Honey, they can’t hear you. It’s a TV.”
The point is, when you consistently find yourself falling just short of success you need to take a moment to stop and reflect. Maybe it’s nerves. A streak of bad luck that keeps coming back, like a rash. Or maybe, just maybe, it’s a deeply-ingrained tendency to sabotage yourself. And these may be the reasons why:

Make it a point to set goals for yourself. They don’t have to be extremely difficult feats – just enough to give you a decent challenge. That room that you’ve wanted to organize for years? Start cleaning it up. Those art classes you’ve been considering? Get yourself signed up. That extra weight you’d like to lose? How about starting with just the first 5 pounds?

The best part about failure is that you’ll be able to determine exactly what went wrong and how you can prevent it from happening again in the future. When an Olympic athlete fails to medal, she doesn’t grab her shoes and say, “Forget this! I’m going home.” She reviews videos of her performance to determine exactly where she can improve.

“I’ve missed more than 9,000 shots in my career. I’ve lost almost 300 games. 26 times I’ve been trusted to take the game winning shot and missed. I’ve failed over and over and over again in my life. And that is why I succeed.” ~ Michael Jordan

“College is not for me. I’m not as smart as you and I don’t think I would do well.”

While she’s accomplished a great deal in her life (overcoming learning difficulties; becoming the mother of two beautiful and healthy children), she’s always preferred to do just enough to get by rather than push herself to achieve more. She recently confessed to me that feels frustrated and restless – and wasn’t sure why.

“Maybe you need a new challenge?” I suggested.

The last time I spoke to her, she sounded completely different. She went back to school and is taking some courses in Office Administration.

“It’s a little difficult since I haven’t been in school in a while, but I’m loving it!” she said.

Bottom line: You really don’t know what you’re capable of accomplishing unless you allow yourself to try.