Home Blog The Top 10 Characteristics of a Type A Personality

When I think Type A, I think of those cheesy, feel-good family movies with the mom or dad who’s always working and keeps missing their kid’s baseball game or ballet recital. After experiencing a sudden health scare or other emergency, the parent has a sudden epiphany: Family is important, kids grow up so fast, money and work are not the only things that matter, etc.

The truth is, it’s really not so far off from what Type A is really like, and how people who have it really behave. Take the client who I was sitting next to at my hairdresser’s: Mom is busy on the phone, focusing more on getting a deal done (she’s a real estate agent) than on her son who was running around screaming and throwing hair rollers around the salon. Mom never looked up once. I offered to play with him (I could see my hairdresser’s face turning purple with anger). He calmed down immediately, and announced loud and clear: “Mommy never plays with me.” Again, mom never looked up.

Type A Personality describes someone who is in an incessant struggle to achieve more and more in less and less time. It’s like being in a never-ending Chinese finger trap: The more you try to do, the worse things get. Although the intense drive and energy of Type A’s is really great for success, throw in a little hostility and impatience and you’ve got one hot mess. Anyone who pushes themselves too hard is at risk for emotional and physical burnout – or worse.

Here are the top ten characteristics that define Type A’s:

It doesn’t matter whether they’re competing for a promotion or playing a friendly old game of Monopoly®, they want to be the one to win, even when competing against friends and family. Being outperformed by anyone sets them off – they’ll do whatever they can to come out on top next time.

Their life revolves around money.

Here’s the kicker: They spend more time trying to make it rather than enjoying it. Type A’s want to surround themselves with upscale luxuries. They see the amount of money in their bank account as the only true measure of success.

Their social status means everything to them.

If people are not impressed when a Type A mentions his or her job title, they will be miffed, to put it lightly. They want a job that’s well-respected, and want to rub elbows with the best of the best. In fact, they often create friendships only with people who can improve their status in some way.

They’re always working toward something – or working, period.

They would hate to waste the day away without being productive. For Type A’s, time is money. After one goal is accomplished they will immediately tackle the next. It’s the people who work late, work weekends, and who take work home. Type A’s abhor laziness.

I tend to be rather disappointed in myself when I don’t get everything done that I wanted to get done; Type A’s become furious. Aside from the fact that they have a never-ending to-do list, any task they take on must be done perfectly or they’d rather not do it all…which only makes them feel even more worthless and useless. It’s a vicious cycle.

They have trouble relaxing.

After work, some people head home, have dinner, and then sit back and watch a little TV – maybe take a bubble bath and play with their pets (not IN the bubble bath). Type A’s can’t shut down. They always feel wound up and hate the feeling of not being busy. Even when they’re on vacation they’re calling the office or bringing their work to the beach. I HATE getting sand in my bathing suit; I can just imagine how furious I’d be if I got sand in my laptop.

They have little patience for others.

History is filled with nasty forms of torture. Roasting to death in a cast iron bull set over a fire; being drawn and quartered; Vlad the Impaler’s, well, impalement. All one would need to torture a Type A, however, is a really long waiting time. They tend to be rather short-tempered, and have little patience for slow processes or people. If you have a Type A as a tutor, you better learn the ropes fast.

They refuse to ask for help, even when they really need it.

Type A’s are really hard on themselves, especially when they can’t do something on their own. To them, asking for help is not just a sign of incompetence, it’s a sign of weakness. They would rather struggle through a problem, however long it takes, than swallow their pride or admit defeat. Achievements that are attained with the help of others just don’t have the same luster.

They need to “keep up with the Joneses”.

Type A’s are constantly comparing themselves to others – and if those others have an achievement or luxury that they have yet to attain, they won’t stop until they get it. They hate the feeling of being inferior to or having less than anyone. Type A’s need to be the one to come out on top, to be envied, and to be admired.

They never have time to do anything.

Despite the fact that they feel over-worked and exhausted, they refuse to stop working. Things have to be done now, not tomorrow – which means Type A’s seldom have time for leisure, family, and friends. Their motto is “I’ll relax later, once I have my money/title/success.” The problem is that “later” never really seems to arrive and remains a distant goal in the future.

If you found yourself nodding and saying, “Yup, that’s me/my spouse/sibling/parent/friend (I have at least three of these symptoms), here are some quick tips:

Give yourself a break.

Schedule “down time” for yourself, and make sure you stick to it. Turn off your phone, say no to any social invitation and do something you enjoy. Unwind, pamper yourself and make it a habit. Remember that “rest” doesn’t mean you have to sit idle on the couch all day; it can involve varying behaviors that break from routine. It is important that you expand your definition of relaxation and rest as a state of mind, not an absence of physical or mental activity.

Know when to compete and when to let go.

Recognize your accomplishments, give yourself a pat on the back, and leave the winning to others from time to time. Learn to let go. We’ve all been taught to compete, to do everything we can to win. But there are so many times when the game isn’t worth playing. We all need to learn to save our energy for the important battles, and to let go of those things that don’t count in the long run. There is so much that happens in the course of our lives that are not ultimately important to our welfare. Learn to distinguish what really matters and pick your battles.

People who feel they have successful lives uniformly emphasize the fact that success is a process. It would appear that when it comes to the business of living, the process is everything. Though having goals is instrumental, there are really no final end points. Things continue to evolve. Goals change and we change. If you can’t take part in the process or live only for some moment in the distant future, you are cheating yourself and those who love you. So remember, the process is everything. Enjoy it and appreciate it while it’s happening. 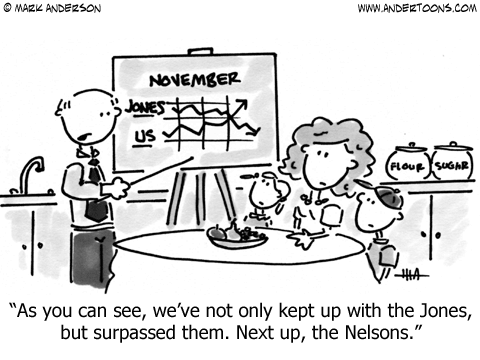