Home Blog The ugly side of perfect

After breaking up with the third girl in six months, my friend begged me for advice. It was the same damn routine: He’d lament over the break-up, ask for some insightful input, agree with it, fail to follow it, and then come back for the same a month later.
“What was wrong with this girl – why did you break up with her?” I asked, trying really, really hard not to sound exasperated.
“Cultural differences. How would we raise our kids?” he answered.
I sighed. “Okay…. and what about the girl before. I thought you liked her.
“I did,” he said. “But she wasn’t calling me as often as I wanted her too.”
“And the other one?” I continued.
“Bah. She was too clingy,” he responded. His face scrunched up like he just bit into a lemon soaked in vinegar.
“I want a girl who’s…”
And then he proceeded to recite a laundry list of deal-breakers, including her exact weight, her nationality, her hair color, the frequency at which she called and texted, and what she liked to do in the evenings. He ended it with, “She’s got to be perfect, you know?”
I got up from my chair.
“Where are you going? I need your help!” he wailed.
“I’m done. I can’t help you. You’re making it impossible for me to help you. The only thing I can tell you is this: There is no perfect woman out there. The only perfect woman is the woman whose imperfections you can live with.” 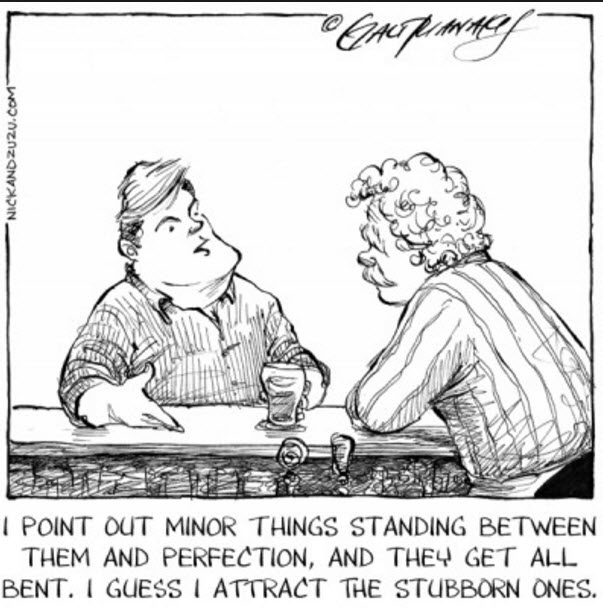 He did end up finding the woman he wanted, I believe, years later, but not before breaking a few more hearts, and after initiating a few more “sessions” with me (although I’ve always wondered what would happen if this girl broke one of his deal-breakers…like gain a few pounds.). He was, and still is, an extreme perfectionist. In business he was always looking to jump on the next big thing, never quite finishing he’s current thing, always assuming that there’s something better out there.
I’m not saying that people should settle for less than what they want, and I’m also not saying that you shouldn’t strive to achieve great things. But there is a point where a desire for perfection becomes unhealthy. And as always, I’ve got the data to back me up. When I compared extreme perfectionists to healthy ones, there was a stark contrast in their attitude toward success, failure, and toward themselves. So if you’re wondering if your perfectionistic tendencies have gotten out of hand, here are the signs to look for:
1. You’re terrified of being criticized if you mess up. Despite wanting other people’s approval, extreme perfectionists are also afraid of negative feedback.
2. Even just the prospect of making a mistake worries you. Extreme perfectionists believe that others will think less of them if they fail.
3. You generalize failures in your life. When extreme perfectionists do poorly on an assignment at work, for example, they interpret it as an inclusive issue, i.e. “failing at work/in my relationships makes me a failure as a person.”
4. No matter how hard you try or how hard you work, it’s never seems good enough. In fact, many extreme perfectionists hand in work late, redo work or never really complete a task because they feel it doesn’t live up to their expectations.
5. You worry obsessively about what others think of you. This, once again, plays into extreme perfectionists’ desire for acceptance and approval.
6. You’re only proud of your work if someone else praises it. The pride of achievement isn’t enough for extreme perfectionists – they won’t pat themselves on the back unless someone else, usually someone they respect, does so first.
7. You insist on excelling at everything you take on. While the striving and persistence aspect of perfectionism can prove advantageous, it’s a double-edged sword. At some point, a person needs to accept his or her flaws and shortcomings, and focus on what makes them special.
(Sadly, no matter how hard I try, I am never going to be a professional hockey player, never put out an album, and never going to star in a film alongside Jason Statham).
8. It takes a lot of time for you to bounce back from failure. Understandably, when extreme perfectionists set their sights at too lofty a height, the fall is a lot harder. There’s nothing wrong with setting the bar high and pushing yourself out of your comfort zone, but make sure you are challenging yourself realistically.
9.You think being perfect protects you from rejection. Here are a couple stats to chew on: 73% of the extreme perfectionists in our study believe that they have to be in perfect physical shape in order to be considered attractive (and in order to keep their partner from leaving them), and 67% think that being wealthy is the only way to gain respect.
10. The idea of being considered “average” in anything is extremely distasteful to you. In my own case, I can honestly say that I agree with this to some extent. I’d hate the idea being considered an average writer, girlfriend, friend, or employee. But tell me that I’m an average driver, cook, seamstress or coach, and I’d probably agree with you. My brother succinctly summed up my problem last week when I was unable to successfully complete a task: “You suck.” And in terms of this particular issue, I wholeheartedly agreed with him.
11.When you look back on your life, you only see your failures, your rejections, and your mistakes. Only 67% of the extreme perfectionists were proud of their achievements thus far, compared to 83% of the non-perfectionists.
And here’s one more sign: You’re upset that my list ended at 11, and not on an even number (I know I am).
So how do you curb a perfectionistic tendency? Here’s what I strive to keep in mind:
Catch yourself in the act of viewing situations in strict, “black or white” terms.
Essentially, don’t approach a challenge or goal with an “all-or-nothing” attitude (“This has to happen or I’ll never be satisfied.”). If you only see an outcome as a success or failure, you’re already sabotaging yourself. If you mess up, it’s fine. Honestly. You can pick yourself up, learn why and where you messed up, and do your damn best to do better next time.
Don’t ever lose perspective of who you are and what makes you amazing.
We’re constantly bombarded by the media with messages about what we should be: Thin, blond, popular, rich, successful, etc. Some people conclude that if they don’t live up to these expectations, they’ll be rejected and mocked. However, by allowing other people’s opinions to influence you, you’re forcing yourself to live up to their standards. Remember, in the end, it’s really only your opinion that matters.
Remember that what is perfect is subjective.
Try as I might, I’m never going to be a leggy blond with bouncy, luxurious hair. But ask five different people what they consider the perfect body or the perfect life, and I can guarantee that you’ll get five different answers. For some, the perfect life entails fame and fortune. For others, it’s health, a job that contributes to the world, binge-watching The Blacklist, or eating a smoked meat sandwich. Again, there is no black or white when it comes to the color of perfection – it’s just a whole lot of gray.

[…] making mistakes, and of failure. I’ve done several blogs on perfectionism, here, here, here, and here. Trust me, it’s not the strength some people think it […]