Home Blog Jealousy: From the inside out

In a champagne induced epiphany, my friend decided that it was time to end her single-hood and join a dating website. I listened in as she filled out the profile questionnaire, although mostly because she insisted on reading each question out loud. Having been one of the authors of Queendom’s “Matchscale” questionnaire (currently being used on some dating sites in different languages), I entertained myself by trying to map each question in my head to determine what it was trying to assess.

“‘I lose my temper’,” she pronounced out loud. “Hmmm. Sometimes. ‘I get to appointments on time’,” she continued.

“Next question. ‘In some cases, jealousy is okay.” She pondered it for a moment, and then said, “Yes.”

I looked up. “Really? In what sense?”

“Well let’s say you’re out with a guy and he meets his ex and starts flirting with her. Jealousy would be justified in this case, don’t you think?” she asked.

I shook my head. “Jealousy is never justifiable. If a guy does that to you, it’s a sign you should dump him. That’s not a decision based on jealousy, that’s self-respect. You deserve better than that.”

“You don’t find jealousy a little sweet though?” she asked.

“Not really. Think about it: Jealousy is never an ‘out there’ factor, caused by someone else. It comes from within – and 99.9% of the time it’s related to self-esteem and security issues.”

The truth is, when our self-esteem is out of whack, it leads us to think things that usually have no basis in reality, like “If I am my true self, no one will like me” or “People find me boring to talk to.” The other downside of low self-esteem? It could also color your view of other people, as is the case with jealousy. Here’s what statistics from our Jealousy Test reveal: 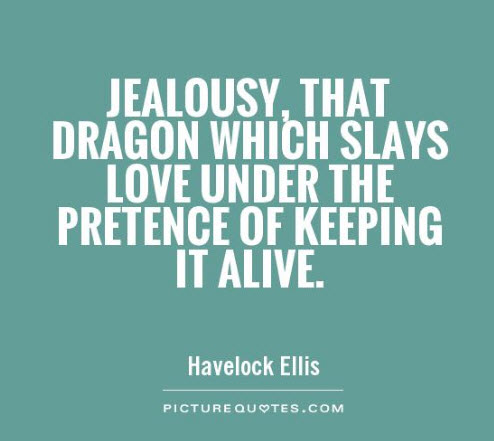 Given that the source of jealous often comes from within, here are some tips to address that:

When we are completely wrapped up in someone, their every action and every word can either lift us up (compliments or praise) or drag us down (criticism). The fact of the matter is, we simply cannot be everything to each other; we need to develop our own individuality in order to bring more to the relationship. As Kahlil Gibran writes in The Prophet, “Let there be spaces in your togetherness, and let the winds of the heavens dance between you. Love one another, but make not a bond of love: Let it rather be a moving sea between the shores of your souls.” Now THAT’s a Facebook-worthy post!