Home Blog Behind nearly every critic is a small, fragile ego

Walking into my mother’s house is like navigating a minefield. Every time I pay a visit, I hold my breath and cross the threshold…and wait.

She does a once-over of my attire, focusing intently on the parts she doesn’t like.

“That coat doesn’t suit you.”

“I saved you some pasta. Do you want any?”

“No thanks, I’m not a big fan of pasta. Save it for your dinner.”

“Then what you are going to eat for dinner? Don’t tell me you’re going to a restaurant. That’s a waste of money and it’ll make you gain more weight.”

I walk out, dragging my mangled pride with me and a container of pasta that I don’t want to eat,  wondering why people get such a kick out of being critical of others. What’s the point, really? Most, like my mother, will say that they’re doing it for the greater good. And that may very well be true. I, however, know better. So does my data from research we’ve conducted at Queendom. People who frequently criticize others are often dealing with their own self-esteem issues. They are more likely to:

I am not implying that anyone who criticizes you does so out of anger, jealousy, or from a deep, dark place in the recesses of their mind that’s filled with nothing but hurt and revenge fantasies. I am also not saying that you should ignore all criticism, because some of it will be constructive and will help you. What I am suggesting is that you look at criticism as objectively as possible before running off to cry in a corner or punch someone in the face. Is there a grain of truth to it? If so, consider how the person’s criticism can benefit your life. If it’s nothing but mean-spirited, stifle the urge to get upset, and take a good look at the person who is offering it. And recognize that for some, the only way to feel big is to make others feel small.
I can imagine myself presenting these statistics to my mother, a look of triumph on my face. 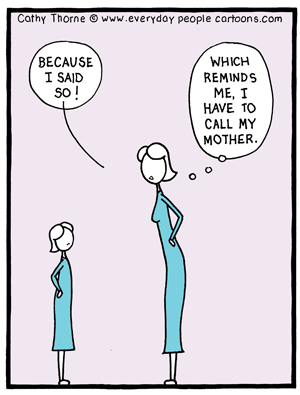