I cringe when I hear a parent tell a boy (and even a girl) some variation of how crying is wrong. The worst is when they add a religious twist, similar to what I was told as I child when I started crying in church (because I found – and still find – true-to-life statues absolutely terrifying. I barely made it through Madame Tussauds’ museum in Vegas):

“Stop crying. God will get mad.”

When did feeling emotions, the foundation of what makes us human, become such an ugly, twisted disease? Part of me wants to point fingers at the uptight Victorians whose porcelain, stoic faces would barely crack a smile. But the truth is this pervasive belief that any form of negative emotion (or even extreme displays of joy, excitement, and love) has become embedded in childhood rites of passages. Crying is reasonably acceptable in anyone under the age of two – but even then, parents are desperate to stem the emotional leak before it becomes embarrassing…to them, that is.

I’m not implying that we should give way to our emotions without restraint. But I think there are a few myths about emotions that simply need to end. Here are some: 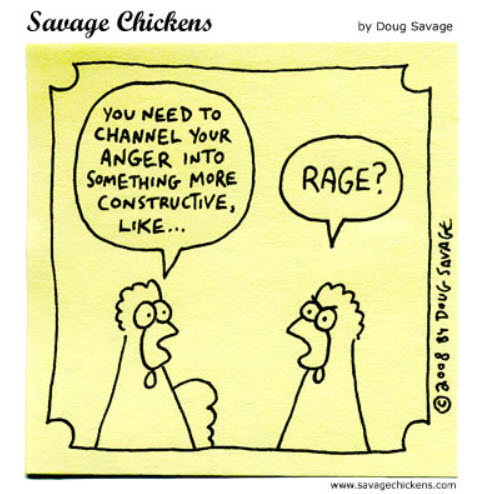 Anger is one of the most controversial emotions. The “crime passionnel” became the basis of nearly every detective novel and TV drama. However, anger itself is not the problem. We all get peeved at people who cut us off in traffic, steals our parking space, or otherwise mistreat us. It’s a normal, human emotion. What’s problematic is how we express that anger. If your response to a guy cutting you off is to honk and swear, then go for it. If your  response is to honk wildly, tailgate him, and then try to cut him off, the problem isn’t the emotion, it’s how you’re releasing it.

And if you think you’re Zen-like behavior of swallowing your anger is healthy, wake up and smell the incense. The more you avoid asserting yourself and telling people what’s bothering you, the angrier and more resentful you’ll become…until one day, that anger will boil over and explode at a rather inopportune time, or you’ll find yourself dealing with ulcers, high blood pressure, or other physical ailments.

“The reason we suffer from our emotion is not because of the emotion itself, but because of our resistance to that particular emotion.”

We’ve developed the belief that emotions and logic are on opposite ends of a continuum. The truth is that they’re actually two sides of the same coin: Emotions are a message we send to ourselves, while our logic (or thought processes) helps us interpret it. Even people who think that they’re using their logic to make decisions are actually depending, at least in part, on their emotions.

Imagine you need to make a major decision, like purchasing a car. You conduct thorough research, compare models on the basis of fuel economy, market value, and all those other fun facts, and then settle on the model that you think is the most suitable. You feel good about your decision because it’s based on cold, hard facts. Right? Not really.

You feel good about it because your gut is telling you, thanks to info from your logic, that this is a good decision. Now what would happen if, upon arriving at the dealership, the salesperson is rude and pushy, refuses to negotiate, and keeps trying to get you to buy additions that you don’t want or need? You’d likely feel upset, frustrated, and maybe even a little overwhelmed or intimidated. There’s also a good chance that you’ll walk out of there, not because the car is no longer a logical solution, but because your emotions are telling you, “This isn’t right.”

A man walks into his home after yet another day of non-stop work and overtime. His boss is really riding everyone hard. As he steps across the threshold, he nearly slips on one of his children’s toys lying on the carpet. He angrily throws the toy across the room, and yells at his wife for not keeping the house clean.

A wife is fixing the bed when she notices her husband’s dirty socks lying on the floor. Despite the fact that the clothes hamper is a few feet away, he makes it habit of leaving his clothes on the floor. Frustrated, she yells at her husband for being so messy and lazy.

You’ve probably figured out where I’m going with this. The husband is not upset because the house is a little messy – he’s stressed and tired, and is taking it out on his family. Just like the dirty socks are not the issue in the second example. The wife is fed up with being treated like a maid, and is feeling disrespected and unappreciated.

When you react with anger or sadness or whatever the case may be to a situation or person, it may seem like you’re responding to the event itself – but that’s only a superficial reaction. Emotions are much more profound and, as I mentioned earlier, are designed to offer us a message. So when you find yourself getting worked up over something, take a step back. Get to the root of what’s really bothering you. And with that in mind…

Myth: Emotions are not within our ability to control.

“You have power over your mind, not outside events. Realize this, and you will find strength.”

This is by far the most persistent and unhealthy myths relating to emotion. We have a tendency to categorize everything in our life according to cause and effect, and our emotional reactions are no different. When something upsets us, we place the weight of the responsibility on the situation or person who upset us. For example:

Reclaim responsibility of your emotions, and you’ll regain your ability to regulate them more effectively. You can’t place the onus on others to NOT piss you off or hurt you. You can’t tell the universe to stop putting upsetting or frightening things in your path. Only you can choose how you feel and how to react.