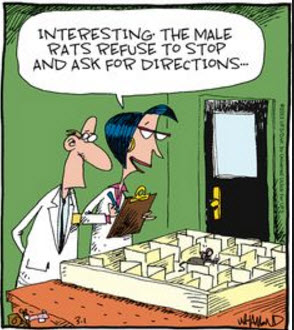 There have been several memorable “thank you” speeches from athletes, actors, and other award-winners. Adrien Brody’s smooch with Halle Berry after winning the Oscar for “Best Actor”; Roberto Beningni’s chair-leaping; Michael Sam’s speech that brought many to tears, and Nelson Mandela’s powerful oration after winning the Nobel Peace Prize. There is one common thread in all these speeches: A sense of heartfelt gratitude to the people who helped these winners accomplish amazing things.

In fact, research we conducted at Queendom indicates that those who achieve great things are not alone in their road to success. It is their humbleness and willingness to accept advice, guidance, and even criticism from others that has made them a success. So if you’re willing to eat a great big piece of humble pie, it may just lead you to a buffet of greatness later.

Our research also indicates that among the goal-achievers:

Non goal-achievers generally run into two issues: They either don’t believe they have what it takes to achieve the goals they aspire to, or they want to be able to do everything on their own – as though asking others for help will diminish the value of their success. So they create more struggle and obstacles for themselves than is necessary.

I myself am stubborn to a fault. I don’t like asking for help, partly because I feel like I’m inconveniencing someone when I do, and partly because I feel that I should  be able to do something on my own. I only ask for help when I’m really, really desperate. So where has that left me? Surprisingly, despite my hard-headed tendency to tackle life’s problems on my own, I am NOT good under stress; I’m like the wicked witch from The Wizard of Oz, melting, melting, melllllllting under the pressure. I’m also not as assertive as I should be, and often get pushed around by people with strong personalities. I also feel like I’m constantly carrying the weight of the world on my shoulders.

You need to be willing to put your ego aside and accept guidance and criticism – there is no way around it. And if you want to achieve your goals, you need to be able to admit when you can’t do something on your own and need help.

That’s what humility is: having the strength and courage to admit to your faults and shortcomings.