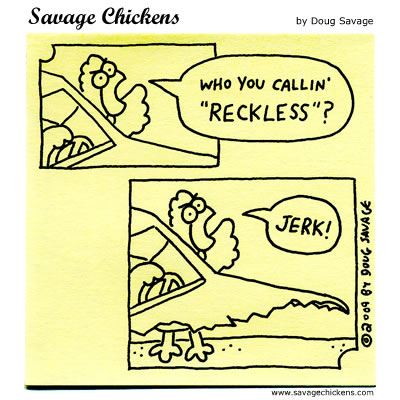 I’m not an angry driver – I just say angry things when I see (enter swear word) drivers doing stupid things on the road like no one else is around. I’m talking to you, guy in BMW, who cut across three lanes at the last minute to get off at an exit and nearly hit me. I’m point my finger at you, lady talking on the phone, who sped up when I was trying to merge. And you…the one who didn’t send me a thank you wave when I let you in after other drivers refused to…I think you aggravate me the most.

On a happier side note, I want to send my personal thank you to all big rig drivers: I love you. As I counseled my cousin who will be getting her license in a couple of years, “You can always count on the courtesy of truck drivers; they’ll always wave you in.”

Am I infallible? No. I drive over the speed limit (not by much, but still). I don’t come to a full stop at stop signs. But I almost always let people merge into my lane, give other drivers the right of way, and strive to not splash pedestrians on rainy, slushy days. In fact, I even helped a cat cross the street. Yup – I raised my hand, made a waving motion to let it know it was safe to cross, and the cat proceeded to do so at a gingerly pace. Clever feline. Did I feel like a bit of an idiot? Sure. Was I glad that I potentially saved Fluffy’s life? You betcha.

I often find myself pulled into discussions in which people heatedly debate whether women or men make better drivers. In my experience – and by no means am I making conclusions based on anecdotal evidence – I’ve found that women are less courteous (men are more likely to let me merge), but men (particularly younger ones) tend to be more reckless behind the wheel. Here’s my real conclusion: There are horrible female drivers and horrible male drivers, just as there are great female drivers and great male ones.
But being who I am and given what I do, I am not going to leave it at that. I’m going to pull up my fancy stats program, upload the data from our Driving Personality Test, run some analyses, and share all the fun, dirty details with you.

Here’s where we’re pretty much on par – but to be honest, some of these statistics are rather worrisome. For example:

I’m not going to get into all the research supporting the fact that it’s so dangerous to do this (delayed reaction time when breaking, increased risk of accidents), but when you drive and talk on the phone at the same time, you’re attention is split. Unlike a computer, we can only perform one complex task at a time, regardless of how fast we think our brain works. Any other concurrent tasks we perform are based on automatic processes; essentially, actions that are not using conscious thought and therefore do not involve our full attention. So what happens when your brain’s resources are focused on one task but not so much on the other, like talking vs. driving? You’ll either miss some of the information in the conversation, or you’ll miss that stop sign.

Here are two areas where men and women differed in our study:

When it comes to road rage behavior…

I already know what you’re thinking: “Does age play into this? Because I really feel that the age of the driver makes a difference. Thank you, you wonderful, beautiful researcher, you are so brilliant.”
Yes, my readers, age does play a role (and thank you for the compliment). Our data reveal that as age increases, courtesy and conscientiousness on the road also increase, while road rage tendencies decrease. So as we get older, we become a lot more patient and less likely to let other drivers’ recklessness or senseless behavior get to us…which means I myself have a lot of room to grow.