Home Blog Mixing the asparagus fork with the cheese fork, and other social faux pas

I am honestly dumbfounded by the ease at which people reveal their deepest, most humiliating secrets on one of those second-rate, no-holds-barred talk shows – in front of millions of strangers no less. I can barely speak above a whisper when talking to my pharmacist about bowel issues.

This is why I kind of love the whole set-up of Downton Abbey, with their countryside manors, perfect etiquette and 85 dinner forks. I love how the men stand up when a woman leaves the table, or the fact that dirty laundry is aired behind closed doors, where it belongs. Aside from some of the more pretentious etiquette rules, like wearing a specific dinner coat for supper, most people, from the kitchen staff to royalty, knew to avoid social faux pas. Gossip? Enjoyed but generally discouraged. Rudeness? Out of the question. Starting an argument in public in front of guests? Nope – none of that “off-time jive.”

Some modern day social faux pas are rather obvious, like don’t interrupt people, don’t burp, don’t start arguments at get-togethers, and don’t sneeze into other people’s dinner plates. Here are some less obvious social missteps that you may not realize you’re committing:

This is one of my top five pet peeves, along with people who:

I think we’ve taken the free speech thing a little too far. Unless someone asks for my opinion or insight on their love life, lifestyle, or whatever the issue may be, I prefer to do them the courtesy of keeping my thoughts to myself. It doesn’t matter whether I am an expert on the matter, or think they are totally wrong; offering an opinion or piece of advice that is uncalled for, is a major social faux pas.  Even well-meaning advice can still hurt or offend someone. Before speaking your mind, consider how others will be affected by your words.

Imagine you’re on a first date: Your potential wooer spends the whole night with his arms crossed, or tapping her fingers on the table, and barely makes eye contact (or worse yet, stares at you intensely without blinking). You’d probably be thinking:

It’s often our non-verbal language that speaks the loudest. Show people that you enjoy their company and are interested in hearing what they have to say – even if you really, really don’t. This means making regular eye contact, maintaining good posture, smiling, nodding, and keeping your hands clasped on your lap or on the table.

Leaning a little too much on others.

When I was working in retail, I became friends with a colleague who was going through a really difficult time in her life. Her husband left her soon after she gave birth to their first child, and they were in the thick of a vicious custody battle. Despite being completely nonexistent the first 3 months of his child’s life, her ex did come from a wealthy family with a string of high-priced, cutthroat lawyers. Being financially strapped, she had to rely on legal aid (several times, as two of her lawyers gave up on her and her case). She called me every day in tears, asking for my advice and reassurance, which I gave her. I even gave her the contact information of a good, reasonably priced lawyer. I also suggested that she seek some counseling to help her get through her troubles. For months on end, we fell into the same pattern: She’d break down in tears, I’d listen and reiterate my advice, she’d ignore it, and then call me with the same problem the next day. Sadly, after a while, I just stopped answering the phone. It was only then that she compelled herself to stand on her own two feet, and hire the lawyer I’d suggested. She won her custody battle.

I’m all for turning to others for support in times of need; our research has shown that social support is one of the top coping mechanisms of happy people. We can’t expect others to solve our problems for us, however. Sometimes, you just have to pull yourself up and rely on your own knowledge, skill, and inner strength. 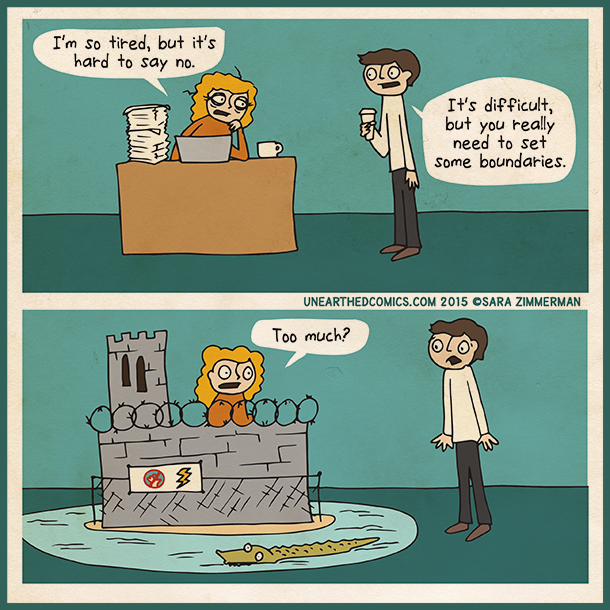 Judging people a little too quickly.

It’s the “Fundamental Attribution Error”: We as humans are forever tying to figure out the motive behind other people’s actions. All too often, we attribute unfortunate behavior on the part of others to dispositional rather than situational factors – like writing off someone as a jerk because he was rude, or assuming that anyone who doesn’t fit within our parameters of “normal” should be feared or avoided. As a result, we are less forgiving than many situations call for.

Try to understand that others are under just as much pressure and stress as you are – and as a result, their behavior may not always represent who they really are as people. Before judging someone’s actions, try to look at them and their situation objectively. What could be going through this person’s mind, or going on in this person’s life? How would you react if you were in this person’s situation?

Some people take to compliments like a person traipsing through the Sahara takes to water: They suck it all in, hungry for more. They may even spend the next half hour telling you why they are so amazing, and why people love them so much, and why you should pretty much bend over and kiss the ground they walk on.

Perhaps slightly more annoying, however, are those who just can’t take a compliment. Rather than saying thank you, they’ll brush off your praise like you’re a big ugly spider crawling on the wall, squishing every ounce of well-meaning appreciation out of your compliment. They’ll tell you it was just a lucky break, or proceed to point out their faults rather than recognizing their achievements.

If someone offers you a genuine compliment, accept it with grace. Say thank you, and let it go. Chances are that if they didn’t mean it (and they’re not a salesperson working on commission) they would not have offered you the compliment in the first place.