Home Blog Spirituality and life satisfaction: Are they indelibly intertwined?

I’ve always adopted the philosophy that religion and politics were not a topic of conversation. My family consists of a mix of moderately devout Christians, atheists, and one spiritualist, and it can turn into a messy conversation. I myself don’t subscribe to a particular religion but I am fairly spiritual – you know, the whole “we are one consciousness” bit. I may be the only one in my family, but I have no interest in trying to convert others. I feel that everyone has to right to their beliefs, unless these beliefs impinge on the beliefs of others – but that’s another blog and frankly, not a topic I plan to take on.

What led me to this theme was a conversation I had with a friend. I’m not sure how it started, but we began to debate about whether people who believed in a divine being were more likely to be happy. She insisted that the over-developed sense of guilt and remorse that religious people have grown up with would put a damper on their life satisfaction. Having studied human behavior for years, however, I opted for a more general theory: That each group had their fair share of anomalies. Naturally, I was right.

When I compared spiritual/religious people and non-religious people who took our Life Satisfaction Test, statistically, the differences were significant – but not all that noteworthy (i.e. the scores didn’t differ by much). Here’s how the scores played out (on a scale from 0 to 100; the higher the score, the greater the sense of satisfaction): 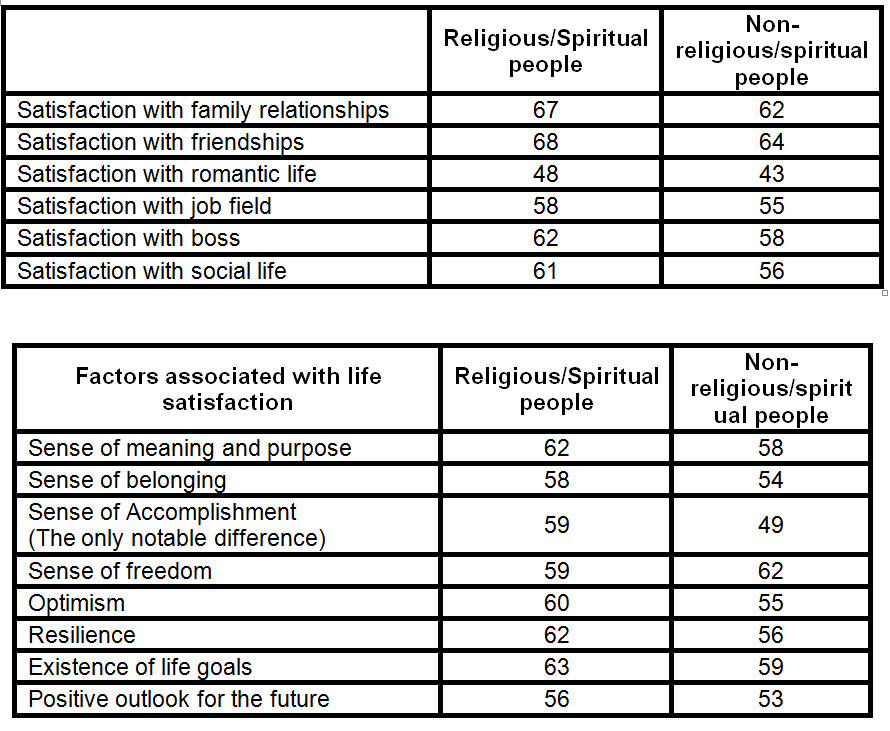 When I dug a little deeper and compared each group’s answers to individual questions, I started to tease out more differences. But again, the two groups were a lot more similar than they were poles apart.
Where these two groups differed the most:

Where these groups were most similar:

So what does this tell me? That despite the fact that are views can be poles apart, we all want the same thing: To be happy. And although what brings about life satisfaction is highly subjective, the advice I offer below can apply to anyone, religious or not:

Let your frustrations and fears out. A study on life satisfaction and negative life events revealed that people who wrote out what was bothering them or who talked things out with someone showed an improvement in mental health and life satisfaction. So when something is bothering you, don’t keep it locked up inside. A problem can often feel less intense when we can share that burden, so to speak. Release all your negative feelings and thoughts in a journal. Talk to a trusted friend, a spiritual leader, a therapist, or join an online community that focuses on helping others get through personal and emotional difficulties. There is always help out there.

Develop an attitude of gratitude. It seems to be human nature to focus on the negative – just turn on the TV to the latest news reports. Rather than focusing on all that is going wrong in your life however, why not focus on what’s going right? On the one hand, you may not have a great deal of money in your bank account, or your ideal partner or body. So what do you have? Two eyes to read this. A heart that beats. A sunset. Friends. A car. A home. Really dig deep and find all the things that you can appreciate, no matter how minor they may seem. You will soon realize how fortunate and abundant you really are.

Find your “raison-d’être”. Whether it’s a hobby, raising your children, training/fostering animals until they’re adoptable, creating art or music or volunteering, find something that adds meaning to your life. This sense of passion will make you feel renewed, and help you realize how special and important you are…not to mention the fact that you will be making a positive impact on someone’s life.

Don’t wait for relationship issues to escalate. Avoiding relationship problems will do nothing for your peace of mind. As uncomfortable as it may be, it’s better to face the issue you are dealing with, discuss it with the person involved, and work together to find a solution. Waiting for a problem to resolve itself, letting the tension build, and wondering what will become of the relationship can be utter emotional and mental torture. Even if the solution lies in ending the relationship in question, at least the burden of carrying around the problem will be lifted, and you’ll have a sense of closure from knowing that you did your best to resolve it.

Read inspirational books. There’s nothing more inspiring than reading about people just like you who went through the same hardships and still managed to come out on top. It gives you hope and a reason to keep trying. Check out Viktor Frankl’s Man’s Search For Meaning, Stephen Covey’s 7 Habits of Highly Effective People, Louise Hay’s You Can Heal Your Life, Herman Hesse’s Siddhartha, Eckhart Tolle’s The Power of Now, and Nelson Mandela’s Long walk to Freedom, to name just a few.