Home Blog Why it might be better to be an optimist

Not having cable often means that I watch a lot of DVDs. I recently watched (re-watched) the episode of The Simpsons where Homer tries to scam people out of money with an auto-dialer. The phone message was as follows:
“Greetings, friend. Do you wish to look as happy as me? Well, you’ve got the power inside you right now. So, use it, and send one dollar to Happy Dude, 742 Evergreen Terrace, Springfield. Don’t delay, eternal happiness is just a dollar away.”

Only miserly Mr. Burns decides that he’d be much happier if he kept his dollar instead. Sadly, I think I would have done the same. I fully grasp the benefits of being optimistic. I have the data right in front of me, which I’ll show you in a moment. I just can’t seem to overcome that psychological block that says, “Careful. Don’t get your hopes up. Because when your hopes come crashing down and you land on your butt, it’s gonna hurt!” I almost feel like I’m tempting fate when I dare to hope. I can picture an alarm going off in the universe’s central control station.

“Uh oh. Looks like human 101128 is starting to hope again. How should we handle this, Captain?”

“All teams engage! Bring those hopes crashing down! Ruin her plans. Make her get dumped. Send her car in for another repair. All units head out!”

So I refuse to allow myself to hope, and don’t expect things to turn out right – which is what usually happens. I am a master of the worst-case scenario. I just can’t help but wonder, however, how my world might change if I *gulp* actually allowed myself to hope. I mean, look at all the advantages of being an optimist, based on data from our test: 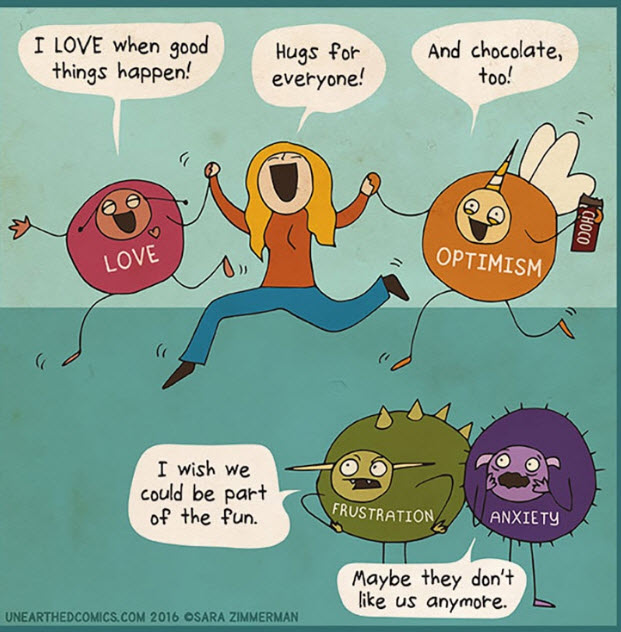 Personally, I’m a little torn about that last stat. While I admire tenacity, I think there are some benefits to giving up or putting an issue aside temporarily, if only to gain perspective. Perseverance is valiant; stubbornly struggling isn’t. When you’re fighting with a problem and gaining little headway, it might actually be a good idea to put it out of your mind temporarily and clear your head. In fact, many solutions come to us through “unconscious problem-solving”, i.e. when our mind is focused on something completely different. According to an article in the Huffington Post, Archimedes was taking a bath when a theory on how to measure density cropped up. Tesla’s alternating energy design popped into his head while he was taking a walk. Rowling’s idea for Harry Potter happened on a train ride, and Gertrude Stein got her inspiration while observing cows.

I don’t believe that a pessimistic outlook is something we are born with. There may be some degree of nurturing (in that having a pessimistic parent could influence a child’s outlook), but switching to a more positive frame of mind can be done. It will however, take a dedicated effort to pivot away from patterns of thinking that have become a habit. Here are some tips from a fellow pessimist (i.e. me):

“In the long run the pessimist may be proved right, but the optimist has a better time on the trip.”

Enough internet for today, lol, you made my day more bright. Thank for this and thank you.